I think I might love this city. It’s rained and been fairly cold, and I’ve worked from 7 a.m until past 10 p.m. each night, so no time for running outdoors, but I’ve kept up with my cardio & crunches & band work and I feel good. 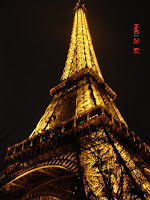 The Eiffel Tower was absolutely amazing! The picture here was taken by me (and is not up for grabs!) shortly before we made our way to the top of the Tower. The view – my goodness – it was breathtaking! I plan to head to Versailles tomorrow and then it’s off to Edinburgh early Sunday morning. I’ll likely spend most of that day traipsing around the town and visiting the castle, then it’s work, work, and more work.

Dinner was at Avenue (41 Av. Montaigne), which happens to be directly across from Dior and Jimmy Choos. It’s probably a good thing we were there late. Despite the distraction of the view, it is definitely worth mentioning that the dinner was fabulous. The service and staff were excellent, the atmosphere fantastic, and yes, I’m running out of adjectives. However, it was a bit odd to see a fairly large dog of some sort (larger than a bulldog but had that look??) wander in the restaurant, but he was well-behaved and didn’t bother the patrons. The staff all seemed to know him, and he simply made his way around and for the most part, kept out of the way. As we were leaving, we encountered another dog that had found his way inside. It was interesting!

There are no words to describe the heavenly desserts in this city. Fortunately, the portions are reasonable (compared to the gargantuan servings in Texas which have led to my ginormous bottom half!) and the guilt is not nearly as bad as when eating something that doesn’t quite taste as good at home.

Julie advised that she can’t make the Rockets Run, which is a bit disappointing since I’ve signed up and now appear to be running it solo. It’s only a 5k, so I know I can make the distance without question. I’ll just be a slow finisher. She says she’ll meet me at the end and that will be way cool (having someone there this time!), but if anyone else is thinking of running it, let me know! I’ll do my best to keep up!

Although I’m enjoying the city, I miss the kids… a lot.

View all posts by Geaux2Girl